Recent data cited by the Stark Education Partnership indicates that education attainment levels among Canton adults ages 18 to 24 exceed both the state and national averages. 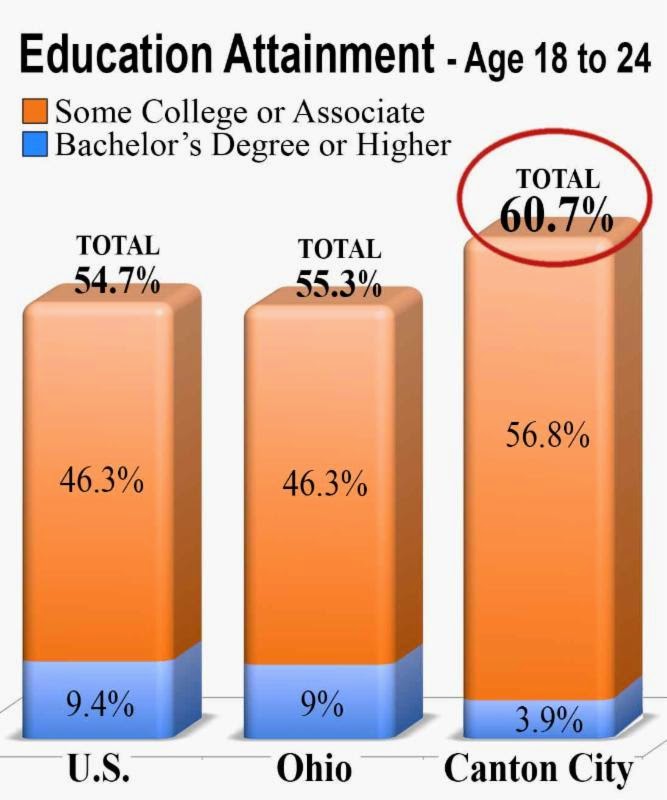 According to the data, released by the U.S. Census Bureau, more than 60 percent of Canton residents in that age group have taken post-secondary classes or gone on to earn a degree, a figure higher than the state (55.3%) and national (54.7%) averages.

A recent report by the Economic Policy Institute, a Washington D.C. think tank, emphasized the importance of education to a local economy: "Overwhelmingly, high-wage states are states with a well-educated workforce. There is a clear and strong correlation between the educational attainment of a state's workforce and median wages in the state."

This news comes on the heels of the announcement in August by Stark State College to establish a natural gas and oil drilling training center as part of a satellite academic center in Downtown Canton. This direct partnership between a local college and the energy industry will better prepare skilled laborers for workforce.

The Stark Education Partnership collaborates with educators, businesses, and civic and community leaders to foster sustainable improvement in schools throughout the county. Furthermore, Stark County is well-positioned to remain competitive in the years ahead, with four-year universities such as Kent State Stark, Malone, Mount Union and Walsh, as well as the education available in technology and the trades at Stark State, one of Ohio's premier community and technical colleges.
Posted by Stark Carroll Oil and Gas Partnership at 9:53 AM