Recently we reported about the exciting developments surrounding the $899 million Carroll County Energy (CCE) facility, a 700 megawatt, natural gas-fired power plant to be built in Carrollton. Among the positives: The prospect of as many as 700 jobs being created during the construction of the plant.

The good news continues with the announcement of two similar facilities coming to Northeast Ohio. 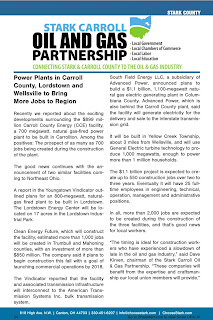 A report in the Youngstown Vindicator outlined plans for an 800-megawatt, natural-gas fired plant to be built in Lordstown. The Lordstown Energy Center will be located on 17 acres in the Lordstown Industrial Park.

Clean Energy Future, which will construct the facility, estimated more than 1,000 jobs will be created in Trumbull and Mahoning counties, with an investment of more than $850 million. The company said it plans to begin construction this fall with a goal of launching commercial operations by 2018.

The Vindicator reported that the facility and associated transmission infrastructure will interconnect to the American Transmission Systems Inc. bulk transmission system.

South Field Energy LLC, a subsidiary of Advanced Power, announced plans to build a $1.1 billion, 1,100-megawatt natural gas electric generating plant in Columbiana County. Advanced Power, which is also behind the Carroll County plant, said the facility will generate electricity for the delivery and sale to the interstate transmission grid.

It will be built in Yellow Creek Township, about 3 miles from Wellsville, and will use General Electric turbine technology to produce 1,000 megawatts, enough to power more than 1 million households.

The $1.1 billion project is expected to create up to 550 construction jobs over two to three years. Eventually it will have 25 full-time employees in engineering, technical, operation, management and administrative positions.

In all, more than 2,000 jobs are expected to be created during the construction of the three facilities, and that’s good news for local workers.


“The timing is ideal for construction workers who have experienced a slowdown of late in the oil and gas industry,” said Dave Kirven, chairman of the Stark Carroll Oil & Gas Partnership. “These companies will benefit from the expertise and craftsmanship our local union members will provide.”

This article was originally written for publication in ShaleMart magazine.
Posted by Stark Carroll Oil and Gas Partnership at 7:23 AM