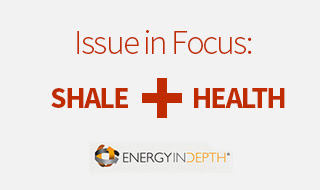 In a report out today, Energy In Depth exposes the latest alarmist tactic from the anti-fracking crowd. EID reveals that a report from the Clean Air Task Force "makes sweeping and erroneous predictions about future health impacts that the researchers blame on fracking -- despite the fact that emissions have been steadily declining, and that, thanks to natural gas, air quality has been improving in the United States."

The report goes on to show how the authors of the scare-tactic report routinely ignore established studies and government data in an attempt to reach their foregone conclusions. In a scathing indictment, the article's author, Randy Hildreth, says "...the authors are far more interested in garnering headlines than looking at the science," and suggests it is the reason the report was not peer reviewed.

This comes on the heels of news earlier this summer that researchers from the University of Cincinnati backed away from a year-long study that only served to debunk, not support, the idea that fracking is linked to water contamination. Perhaps it was because they had just been forced to retract a previous report that claimed fracking was causing significant air pollution in Carroll County -- due to "errors" and "miscalculations." 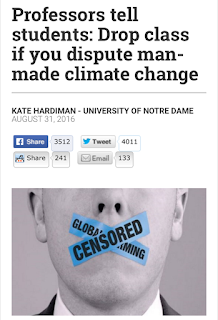 Now a report is released revealing how three professors at the University of Colorado-Colorado Springs, for a course titled "Medical Humanities in the Digital Age," plan to assume man-made climate change is fact and will not entertain opposing views. Such views will not be heard, considered or debated.

Furthermore, the professors intend to delve into "the health effects of fracking," despite the scientific evidence that such effects are a myth. According to an article on the College Fix website, (which promotes a conservative viewpoint), "The reading assignments in the fracking section focus only on its negative impacts and fail to present the other side of the issue, namely the possible benefits of fracking."

It's unfortunate that these educators, who claim to have science on their side in the climate change debate, would willingly ignore the ongoing scientific evidence that -- as EID's Jackie Stewart so eloquently put it last spring -- continues "to 'disappoint' agenda-driven anti-fracking groups."
Posted by Stark Carroll Oil and Gas Partnership at 4:22 PM 9 comments:

NFL Hall of Famer Floyd Little to Highlight Our Reception Aug. 7 After the Enshrinees Roundtable

Floyd Little, a member of the Pro Football Hall of Fame Class of 2010, will be the guest at an exclusive reception sponsored by the Stark Carroll Oil & Gas Partnership on Sunday, Aug. 7, following the annual Enshrinees Gameday Roundtable in Canton. 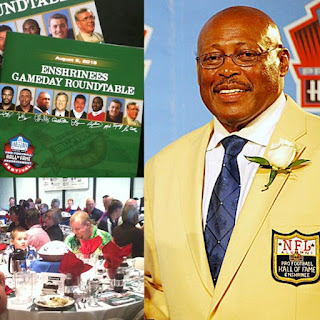 After a stellar college career at Syracuse University, Little joined the Denver Broncos in 1967. He gained more than 12,000 all-purpose yards over nine seasons, appearing in five Pro Bowls.

The reception will take place following lunch and the annual roundtable, which features members of each year’s Enshrinee Class in an unscripted, up-close-and-personal format.

“This is our second year hosting the reception, and we’re thrilled to have Floyd Little as our guest,” said Dave Kirven, Partnership chairman. “His career speaks for itself, and our guests will have an exclusive opportunity to meet and visit with him in a relaxed, informal setting.”

Kirven said the reception will end no later than 5 p.m., giving guests ample time before the NFL/Hall of Fame Game between the Green Bay Packers and Indianapolis Colts, which kicks off that evening at 8 p.m. at Tom Benson Hall of Fame Stadium.

Tickets for the reception are $90 and include admission to the luncheon and the Enshrinees Gameday Roundtable. Sponsorships are also available. For more information, call (330) 451-6207 or visit www.choosestark.com.
Posted by Stark Carroll Oil and Gas Partnership at 12:24 PM No comments:

For the second consecutive year, the Stark Carroll Oil & Gas Partnership will host a reception following the Pro Football Hall of Fame Enshrinees Gameday Roundtable on Sunday, Aug. 7, at the Canton Cultural Center for the Arts.The reception will take place in the Preyer Gallery of the Cultural Center, located at 1101 Market Ave. N. in Canton. Floyd Little, a 2010 Hall of Fame enshrinee, will be our special guest at the reception. Little, a five-time All-Pro running back gained more than 12,000 all-purpose yards during a nine-year career with the Denver Broncos.The afternoon will begin with a luncheon at 12 noon. The Roundtable will follow at 2:30 p.m. It's known for its casual and lighthearted atmosphere. Taking center stage, the enshrinees in attendance will share stories from their careers with those in attendance.Afterward our reception will feature light hors d'oeuvres, beer and wine until 5 o'clock.Tickets are $90, and sponsorships (tickets included) are available. Call (330) 451-6207 for details or visit the Roundtable page on the Stark Carroll Oil & Gas Partnership website.
Posted by Stark Carroll Oil and Gas Partnership at 10:26 AM 1 comment: 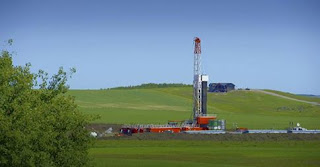 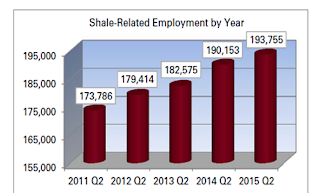 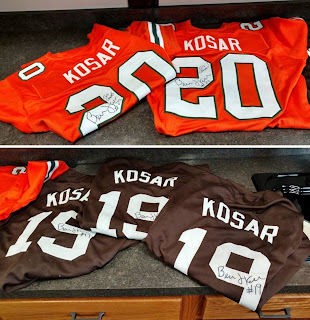 Five autographed Bernie Kosar jerseys -- two from his college days at the University of Miami, and three from the Cleveland Browns -- will be among the auction items up for bids at the 2016 Draft Day Experience at the McKinley Grand Hotel in Canton, Ohio on Thursday, April 28.

Also featured will be a Pro Football Hall of Fame souvenir football autographed by Brett Favre and other members of the Enshrinee Class of 2016. Two lithographs, featuring Hall of Famers Jim Taylor and Don Shula, will be up for bids, along with other exciting.

Ticket holders for the event will receive a souvenir gold medallion minted exclusively for the Draft Day Experience. Each medallion comes in an attractive case and features the Draft Day logo on one side and the Pro Football Hall of Fame logo on the other. 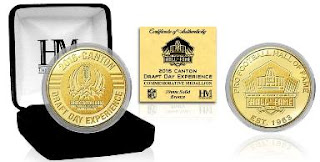 Doors will open at 7 p.m. and the festivities will get underway at 7:30. The 2016 NFL Draft will be shown on giant screens in the hotel ballroom as guests enjoy delicious food, an open bar, and a roundtable discussion between picks. The roundtable will be moderated by Kenny Roda of WHBC radio, who will talk about each pick with former NFL players who will be in attendance at the event.

Tickets are just $125, with proceeds going toward the Legends Landing assisted living facility that will be a part of the planned Pro Football Hall of Fame Village.

For more information about the Draft Day Experience, visit any of the links below:


Posted by Stark Carroll Oil and Gas Partnership at 8:49 AM No comments: 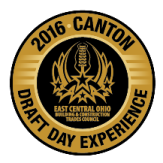 Plans continue to take shape for the 2016 Draft Day Experience, April 28 at the McKinley Grand Hotel in Canton.

We'll watch the first round of the NFL Draft unfold on large projection screens in the hotel conference room, while enjoying great food, beverages, music, a silent auction and more. In addition, Kenny Roda of WHBC radio in Canton will moderate analysis of the draft picks live with former NFL players in attendance.

Speaking of former players, Hall of Famer Dave Robinson, legendary linebacker for the Green Bay Packers, will join us, along with former Cleveland Browns stars Don Cockroft, Hanford Dixon and Felix Wright, and other NFL alumni.

Members of the Canton Charge Girls will be on hand, as well. And, to show our appreciation to our guests, ticket holders will receive a commemorative medallion being minted especially for the Draft Day Experience. It will feature the event logo on one side and the Pro Football Hall of Fame logo on the other.

The Hall of Fame is one of the sponsoring organizations for the Draft Day Experience, along with the East Central Ohio Building & Construction Trades Council and the Stark Carroll Oil & Gas Partnership.

Tickets are $125 each, and proceeds will benefit the Legends Landing assisted living residence that is planned as part of the Pro Football Hall of Fame Village. Doors open at 7 p.m. and the event begins at 7:30. Corporate sponsorships are available and include a pre-event VIP reception that will offer a chance to spend time with some of our NFL alumni who will be in attendance.

Visit our website for complete details: www.ChooseStark.com. We look forward to seeing you at the Draft Day Experience in Canton on April 28!
Posted by Stark Carroll Oil and Gas Partnership at 8:10 PM No comments: