Ohio's Gas and Oil Output 'Should Get People's Attention'

That's what Peter MacKenzie of the Ohio Oil and Gas Association said on March 6 about the numbers released by the organization during its 67th winter meeting in Columbus. 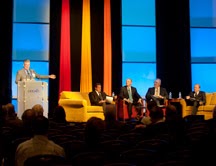 As reported in the Akron Beacon Journal, the data shared at the winter meeting showed that oil production nearly doubled over the past year, and natural gas production rose 2-1/2 times higher.

The data "should get people's attention," the story quoted MacKenzie as saying. "It sure got my attention."

The OOGA is a close working partner of the Stark County Oil & Gas Partnership. Their annual Winter Meeting brings together industry leaders from Ohio and across the nation to share news about the state of the oil and gas industry, through business sessions and a trade show. About 80 vendors participated in this year's trade show during the meeting.
Posted by Stark Carroll Oil and Gas Partnership at 5:37 PM No comments: